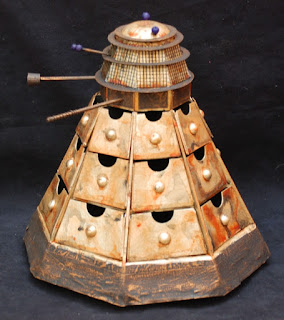 Happy Wednesday, Second post for me today so thanks for sticking with me, as always it is so great to have you stop by.x

Now this project goes back a little while, Whilst at the Ally Pally craft show in April having a good look round I got to chatting with Di Oliver of Tando-Creative and Helen Pigott from Its Crafting Time who had been discussing alternate uses for some of the Tando range and that the xmas advent calendar looked a lot like a Dalek, I think it was right place at the right time as I was then given the challenge of turning the tree into the Dr Who villain. 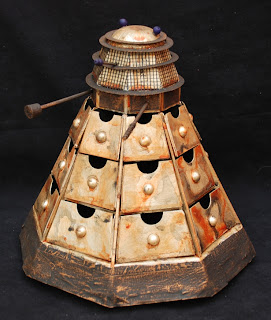 A little while later I received the kit and set to work figuring out what I needed to do. The kit it's self goes together really easily, this little pic shows how the tree looks un painted and the next one is of a tree fully painted up as an advent calendar, I gave mine a Tarnished Brass finish using Decoarts Acrylic paints and  one of Andy Skinners  on line workshop finishes from Time Worn , details can be found on his blog. 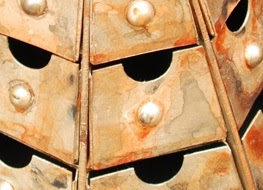 I needed to make a couple of sections for the conversion and after a couple of fails found the right way to make the sections I needed, the dome is from an old telephone bell and the mesh has been cut from some magic mesh and glued down after being painted with decoart paints. The arms are kebab sticks and a tooth pick has been used for the top arm thing.
I wish this had been my idea but I had so much fun creating this, I can already see ways of making it better.
Now if you do not know who Tando-Creative are follow the link to their blog, they are a UK company that produce brilliant chipboard parts and kits, there should be a product range on their blog as well as a list of suppliers.


I would like to enter this into the challenge over at Simon Says Stamp And Show, they are having a 'Kraft' theme, Im not 100% sure what that is but chip board was mentioned and this has been made from a chipboard kit so hopefully that counts x

Anything But A Card are having a 'Masculine' challenge.

Crafty Cardmakers are having a 'Steam Punk' challenge.

The Stampotique Designers Challenge are having a 'Anything But A Card' theme, I looked at the rules and could not see anything about having to use a stamp so hopefully all is good.

Left Of Center are having an alternative or Embossing challenge.

Punk You Girl Are nearly finished their first challenge, the theme is 'Anything Goes' and they are a new alternative challenge.