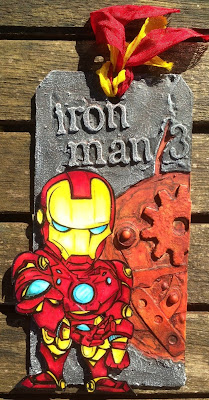 More tags from me today,thank you for stopping by, it is always great to have you here. 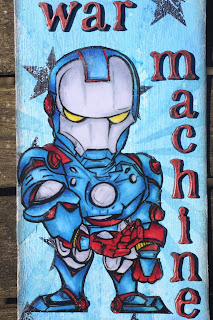 Last week I was lucky enough to get an email from Lily over at the Octopode Factory asking if I would like to do something with the Iron Man Image she has created with the release of the new Iron Man 3 movie this week.Of course I jumped at the chance and made these two tags.If you head over to Lily's blog you can see some more Iron Man art and see what else the Ocopode Factory is all about.   The Iron Man image's were coloured with Copics fussy cut and clear embossed twice.The first one was coloured like the traditional Iron Man and for the second I thought I would have ago at using the colours of the character War Machine. 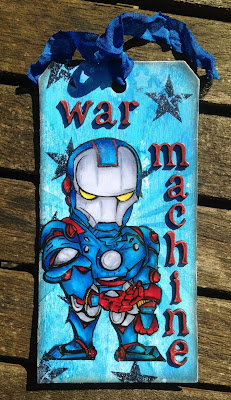 For the Iron Man tag I used a technique from Andy Skinners Book Of Ruination to give a rocky steam punk look, the ribbon was coloured with Dylusion sprays.
For the War Machine tag I started with a mount board cut tag using the Tim Holtz tag die. It was given a coat of Gesso and then sprayed with blue Dylusions ink and a light spritz of the White Dylusion spray and blotted dry. I used a sun burst stencil and stippled some white acrylic paint through to give a ghost sun beam, the white paint drew up some of the blue spray.
I then over stamped in white ink some stars with a stamp from the Artistic Stamper, the black stars are from Tim Holtz.
The War Machine letters are from Tim Holtz and have been given a coat of a rub and buff in scarlet. The ribbon was coloured with Dylusions.
I had great fun creating these tags. If you have never stopped by the Octopode Factory you really must, the images are great, If you have stopped by here before you will probably have seen I use them quite a bit.Lily has some amazing characters from things like The Wizard Of Oz, Alice In Wonderland,Charlie Chaplin, The Avengers even some David Bowie images. 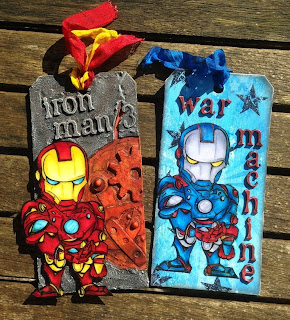 Again thank you for stopping by. x

I would like to enter a couple of challenges.

Crafting When We Can are having an At the Movies theme.

Simon Says Stamp And Show are having a Colour challenge. They just want to see bright colours.
My post went up 1:30am Monday but the blogger clock is not set for uk times.
Posted by mark gould at 23:47