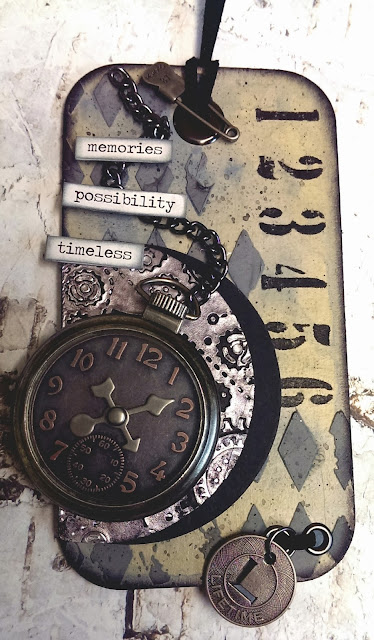 Morning all. I'm sharing my take on Tim's first tag from his 12 tags of 2014 if you follow the link you can see Tim's inspiration and his step by step on how he has made his Jan tag.
After a great day's crafting with Neil Walker yesterday we both set about tackling Tim's first tag of the year.
I have tried to put my own little spin on Tims tag whilst still aiming to remain true. 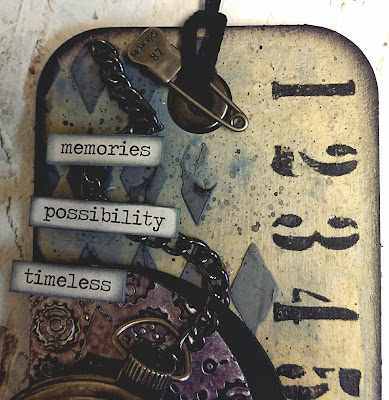 For my tag I used a Tando-Creative Mixed Media Board, these are made from chip board/gray board and are brilliant for using paint and various mixed media products as they hold up much better than straight paper.
For my background I used Decoart American Acrylic paint's, I used one of
Andy Skinners stencils for my numbers and coloured some of their modelling paste with some paint and used The Crafters Workshop Shabby Harlequin stencil. 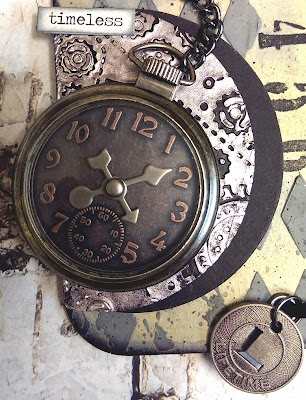 Instead of the Sizzix pocket watch I decided to go a little more 3d and used Tim's ideology watch and added one of his clock faces to the inside with a couple of his compass hands.The chain was added and the watch was glued to a couple of circles that had been die cut.
The top circle was covered with sticky foil and embossed with one of Tim's embossing folders, this was aged with some black acrylic paint.
To finish off I added some chit chat stickers and a couple more pieces of ideology.

The plan this year is to do all of Tim's tags with my own little twist, let's see if I can follow through. 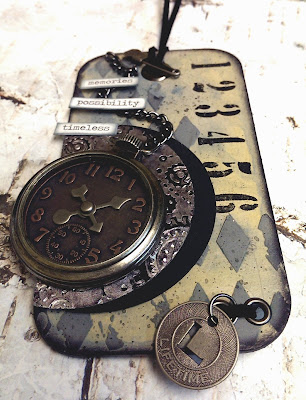 Thanks as always for stopping by. I'm going to be linking this up to Tim's play along.

I would also like to enter this into the challenge over at Simon Says Stamp Monday Challenge. they are having an anything goes challenge.