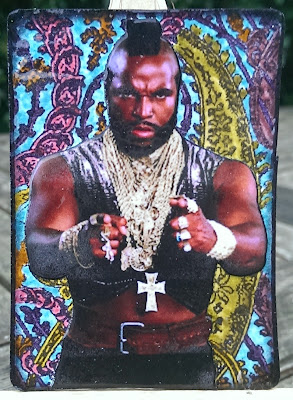 Morning all, Hows things?
We are starting a new challenge over at Fun With ATC's
the theme this fortnight is Kitsch. Now to be honest this was a tough one for me, Kitsch is one of those words that you kind of know what it means until it comes do create something Kitsch. A quick look at the definition and I was still struggling with what to make.Kitsch basically translates as something tacky but with some sort of iconic or mass appeal. Think of all those posters sold in shops like the G store or athena etc.
I decided to go for an Icon of my childhood, The A team was my favourite tv show for years, I still like it now to be honest so I found an Image of Mr T on the net.
I made 2 ATC's both using the same image but just changing the backgrounds. 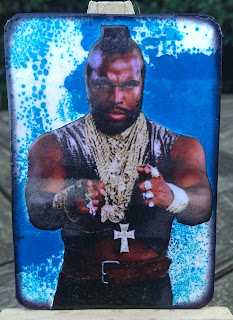 The first one uses the paisley stamp from tim holtz, It was coloured with distress markers and Mr T was glued down, the edges have been darkened and then the whole thing has been clear embossed twice.
For the second ATC the background has been created from a blank ATC that I used to mop up some Dylusion sprays, I just dabbed it into the over spray and stored it till I found a use for it.
Both back grounds put me in mind of those tacky 80's style posters you could get.
Hopefully I have got somewhere near our theme of Kitsch, It would be great if you could come along and join in just to show me how it should be done ;)
you can enter HERE

Thanks for stopping by, Ill be back tomorrow with my first Tutorial style post. xx
Posted by mark gould at 14:59