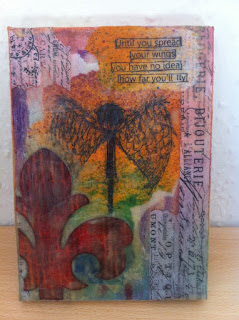 basically create something a little dark/gothic or halloween inspired using the theme melted.You can interpret this anyway you choose, There are loads of great DT pieces to get your creative juices going over at Haunted Design House.
When I knew we were doing this challenge my mind went straight to my melting pot, I have only used it a few times but I really love playing around with the melted wax. I have found it to be a medium that just lets you play, you can just layer up and layer up until you like what you are left with, if you make a mistake or don't like an area you can just go over it with the next layer of paper etc. 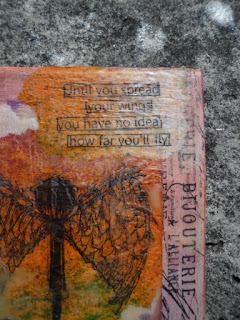 Right, so I chose to do a small canvas about 6''x8'' I started by spraying the canvas with Dylusion sprays, pink and orange going through to green blue and purple, at this stage it was BRIGHT but I new when the wax goes on it would mute it down a little, I sealed that with the first layer of wax, added some streaks of alcohol ink which i covered with wax before it had dried so it smeared and streaked in with the wax (make sense?)
I stamped one of my new Stampotique stamps on to white tissue paper and layered it on, I was hoping for the tissue to become more translucent but you could still see it so I re stamped the image onto another bit of tissue paper and then sprayed with the Dylusion inks and stuck it down over the top of the first image, you can see the first layer poking out from underneath in a couple of places.I used some Tim tape for one of the edges and corners and stained them with distress inks to get rid of the stark white look. I also used one of my Dyan Reaverley saying stamps 'Until you spread your wings you have no idea how far you'll fly'
Its one of my favourite quotes and fits the Stampotique image really well.I finished it off with a Fleur de lis I cut out of grunge paper using my sizzix die, it was stained red with Dylusions and then embossed and highlighted with distress inks to match the other colours.As it's quite a thick medium it took a liberal amount of wax to get it stuck down but it all adds to the overall texture and depth.
The pics have not really done this justice, because of the wax I was getting glare like no ones business, If anyone knows how to take these pics please let me know ;) x

I would like to enter this into the Simon Says Stamp And Show their challenge is 'Tape It Up'  I used the Tim Tap in their. Also a big thank you to them, I was so lucky the other week, I won the draw for the $100 Ten year b'day draw.
I would also like to enter this into the challenge over at Anything But A Card their challenge is 'Texture' oh and of course, not a card.  Yay.  they are a new blog, this is challenge No 2  I love not making cards x ;)
Over at Lexi's creations they are also having an 'Anything But A Card'  challenge.
Posted by mark gould at 12:16