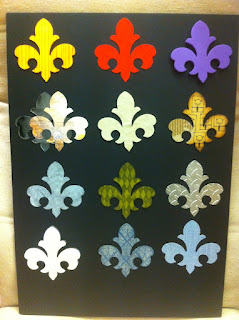 Hi all, Last weekend whilst I was in my local craft shop,
The Craft Barn I was asked if I would like to help out and demo the Tim Holtz Vagabond machine at their demo day on the 8th Sep. Now I was asked because they know I have a Vagabond not because Im a whizz of any kind ;)
To say the least I was taken back and after a days thought I decided what the hell lets give it a go.
Basically on the day there will be several of us showing how each of the main machines work, The Vagabond, the Cuttle Bug, the Grand Calibur , Big Shot, sling shot and pea shooter.  Ok so a few of those may be made up ;)
All I have to do is show how the machine works with all the different dies that are out there and the sorts of material the machine will cut etc. (not to hard??)
Oh I also need to make a sample board and some pieces of work giving examples of die cut and embossed pieces. 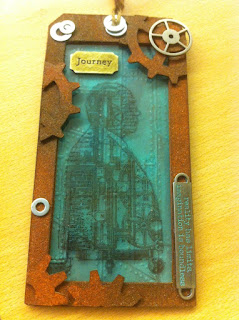 The first pic is the sample board I have made, It has now been label'd with each of the materials. I have a few past projects I can take along and have made a box and a tag, nothing mind blowing but hopefully they show off die cuts and embossing?

Firstly the tag, I really wanted to make this tag using the same techniques and finishes as an ATC I made for a swap a month or so ago. I used the Tim Tag die and cut out a tag in craft card, two in mount board one in acetate.The craft card was embossed with the metal plate folder from Tim Holtz and painted with a copper patina effect from the Andy Skinner workshop, the 2 bits of mount board were then cut with a craft knife so they became frames, the top one was stained with distress inks and then embossing powders to give it a rusty look, the acetate was stamped with a Paper Artsy steam punk stamp.I also cut a couple of cogs from the Tim cogs die and gave them the same finish as the frame.The acetate was layered in between the mount board so it was raised from the patina effect and recessed from the front of the tag. the cogs were cut and stuck on around the edge. I used a couple of other embellishments to even out the colours a little. 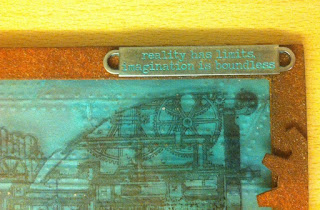 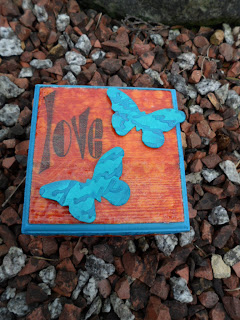 I think rust and patina'd copper is distressed?? ;) 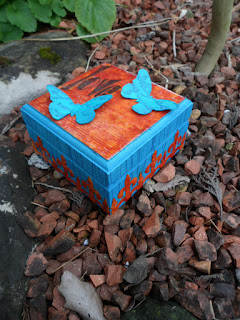 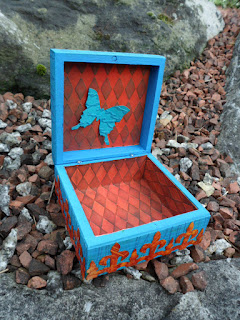 Secondly I made this box, Its a simple little wooden box,I stained the top with distress inks and then stamped over the top in sienna archival ink with a cover a card stamp and the 'love' stamp from Dyan Reaveley. This was then coated with a couple of coats of UTEE. I used the movers and shapers butterfly die, embossed them with a script folder and coloured them with distress inks as well.For the sides I used the on the edge die and used the same colours and stamp as i did for the lid, they have also been coated in UTEE to tie it all together.
For the inside of the box I ran some card through an embossing folder and again used distress inks for some colour but added a little black so it was not quite so in your face. I also added another butterfly for the shear hell of it ;)

Hopefully they show a few of the different dies in use??

If you are about on the 8th Sep and want to see me make a fool of myself pop on down to the Craft Barn It would be great to see you, and if you do know me from Blog land say hi ad introduce yourself x


Thanks for sticking with this post,I do waffle at times. ;)