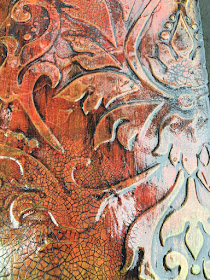 Morning all, Today I am sharing a little step by step on the Decoart Media Blog where I have created a gothic baroque style wall hanging creating texture with Modeling paste and crackle glaze.
If you have time it would be lovely to see you over there xx. 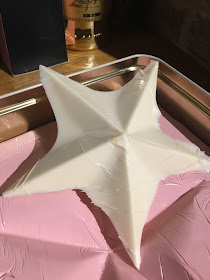 So how is everyone?
I've been planning a new class for a retreat I have coming up soon and I am planning on using some cast resin pieces as part of the kit.
This was all very good in principle but having never attempted casting anything before it left me with a little bit of a challenge.

This weekend I finally got round to having my first attempt so I thought I would share with you what I did and how it turned out.
I started a few weeks ago by doing an internet search for silicon mould making to see what products were out there for me to use. After reading a different company websites I decided on an Irish company MB Fiberglass  and gave them a call,  I explained what I wanted to achieve and that I had never tried anything like this, they were extremely helpful in explaining the different products, cure times etc and what should be done to get the required results.

I decided on getting their 1.1kg Polycraft GP-3481F Silicone kit  £20ish for making my mould
and their 1kg Polycraft SG 2000 Fast Cure PU Resin System £15ish for making the resin embelishments.
When handling and using these products it's recommended you use a pair of rubber gloves and some eye protection.
The Silicon mould making kit comes as a two bottle kit, a 1kg bottle of what I assume to be a liquid silicone  and a 100g bottle of liquid that will cause the silicone to set to a flexible mould. (i am sure there is more to it than that, the science isn't important ;) ) 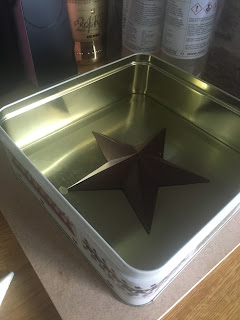 I wanted to cast a 3d metal star I have and its about 5 inches across.
you need to create a space to pour the silicon. I have used an old biscuit tin as it was just about the right size, If anything it's a little bigger than it needed to be. You could use a flat surface with your craft sheet as the base and modeling clay to build a wall. I was told a 10mm thickness of silicon around what you are casting is enough to make the mould viable anything beyond that is technically a waste of product. Depending on what you are casting though it's just easier to find a suitable container and pour. 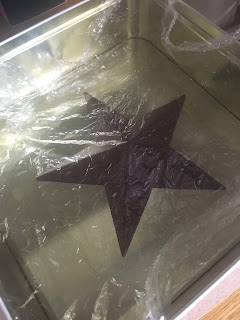 The star I have is made from thin sheet metal so is hollow on the reverse. to stop the silicon from seeping under in the mould making process I decided to place a sheet of cling film over the star and to line the whole tin including the sides. This created a sealed barrier between the star and the silicon, it would also create extra texture on the stars surface.
I could also have set the edges of the star into some modeling clay and cleaned the edges with a craft knife to get a smooth clean edge to the star. 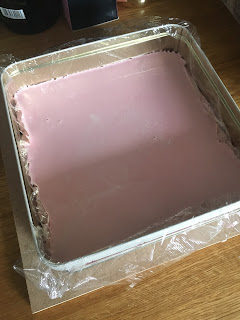 I picked up a couple of cheep plastic measuring jugs large enough to contain the 1.1kg load of product.
I should have done some maths to figure out exactly how much product I needed but as I only had a max of the 1.1kg bottles I thought I would need all of it if not a little more.
Mix bot parts together in the measuring jug making sure its mixed together properly. The 1kg bottle is the silicon and is very thick and white in colour. The 100g bottle contains the setting agent and Is red in colour. Imagine mixing food colouring into dough. Once its a uniform colour you are ready to pour the liquid into the container. Do this slowly as you don't want to trap any air bubbles in the mould. Leave it to sit for 6-8 hours or over night.
If you don't need to use the complete 1kg tub you will have to do a little maths to figure out how much of each product is needed. 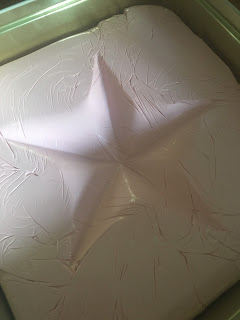 Giving a gentle pull on the clingfilm the silicon mould released nice and easy and came out of the tin without any trouble, Once flipped round I could place the mould back in the tin which will help with storage and keeping it safe, It has also added a little extra stability to the base as I only just had enough product for the mould, the point of the star is a little thin (not the 10mm recommended thickness). I have since picked up a couple of 6 inch round cake tins that will be perfect for my next attempt.
Using the cling film was great for adding extra texture but in a couple of places it has slightly rounded my edges, Next time I will make sure to pour slowly and work the clingfilm down around the edge of the star. 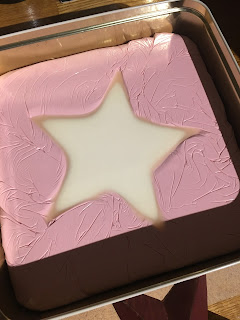 Using the Polycraft SG 2000 Resin I worked out I needed about 100ml of liquid to fill the star shape.
The resin kit is also a 2 part system and is a 1:1 ratio.  So I would need 50ml of one bottle mixed with 50ml of the second bottle.
The product works by creating a chemical reaction that causes the two liquids to set, at this point once you mix you want to pour fairly quickly as it starts to set pretty fast, so have everything ready to go before you start the mixing process.
Carefully pour the liquid into your mould and leave to set, the stars set in about an hour and were ready to be popped out of the mould. 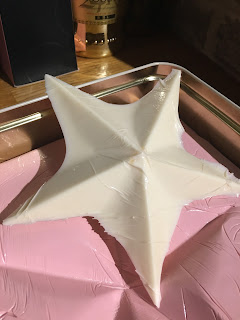 You can just about see towards the base of the star where I lost the definition of my edges but also the extra texture created by the clingfilm.
I think I will be able to get about 10 stars from the resin kit I bought which means each 5 inch star is costing £1.50 which I think is pretty good value and the silicon mould will last for 100's of pours if looked after.

I also found the best way to clean up the plastic measuring jugs was to leave the dregs of the product to dry completely. The silicon just peels away in a very satisfying manner ;)
With the resin it might be an idea to leave something like a wooden lollipop stick poking out so you have something to grab, it still pulls away from the jug fairly easily and cleanly.

All in all I was very impressed with how easy it was to make the mould and create the resin stars.
I made the mould at lunch time and by the time I went to bed I had three stars made.
Lots learnt and I am no longer wary about giving it another go and with a few tweeks I will get the results I am after all ready in time for the new workshop.

As always a huge thank you for stopping by. Hopefully the post wasn't to wordy for you and sorry the pics were not a little more exciting ;) xx